In most of the parts in the world public transport is something normal, we even don't pay attention to it, we continue to plan our day, red a book, call someone, spend time on social media or whatsoever. Simple, insignificant part of our day. Not for a woman in India. Especially a foreign girl.

Auto Rickshaw/ Tuk-tuk the adventure starts from the moment you have to get one. You must find one, then to explain where you want to go (and I will not even talk about how drivers try to take advantage of foreigners). When it's done, you bargain for the price and go. In big cities it's not a problem and you can easily get a ride which will be comfortable. In rural areas the story is different. Firstly, Auto won't go until it's full (in rush hours) and by full I mean more than 10 people. Squeezed together with men, women, old and young. You are so close to other people that you can feel their heartbeat. Unfortunately it's a great place for men to take an advantage of women. You are simply so close to each other that you really don't understand if there is any touching happening or I am overreacting because of my stereotypes. Many times I felt incredibly uncomfortable. Either you get out, lose time or stress out and keep going! 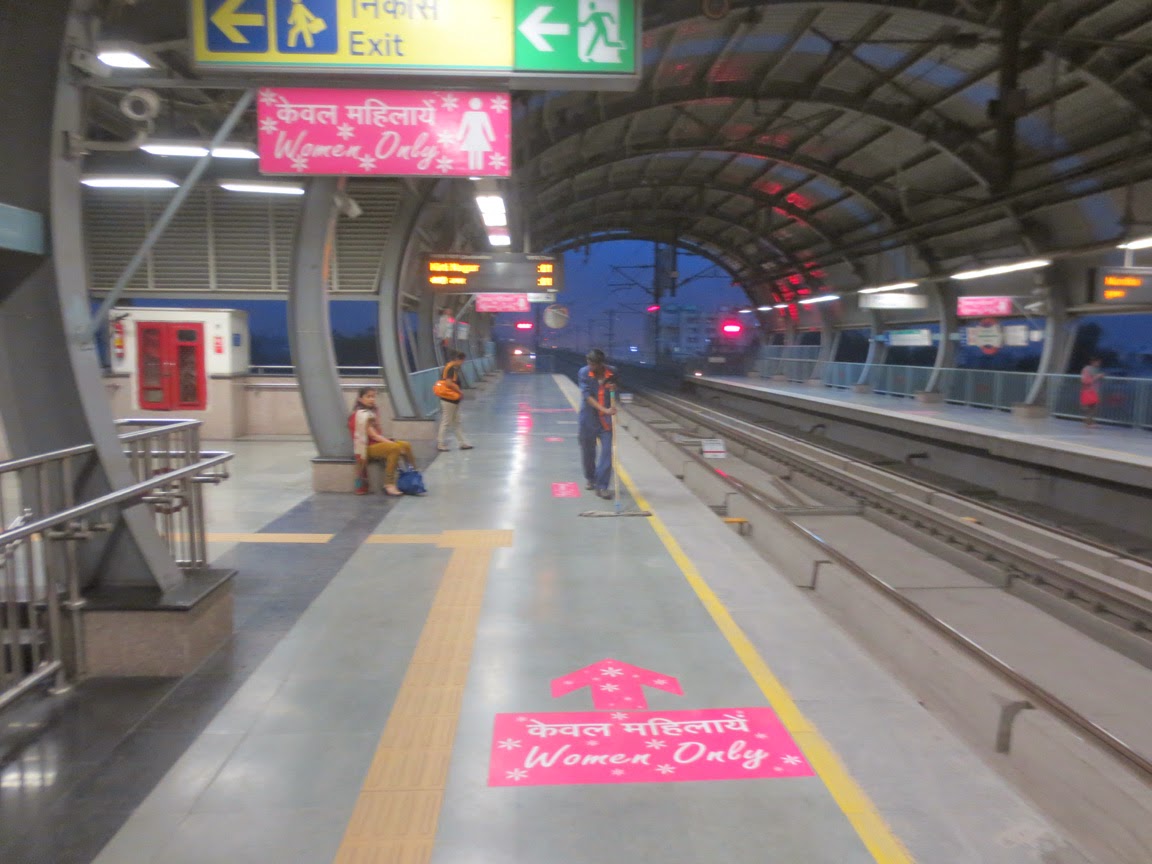 Metro system is also not the same as we are used to. At least what I experienced in New Delhi was that last wagons are made just for women. At first it's hard to believe that such a thing rally exists. If men get caught in this area, then they get fined. Women are allowed to go in the rest of the wagons. The whole metro system is developed quite well and with unnecessary high security system. For me metro felt as the safest public transportation almost the same as at home. Nobody stares, different nations and people busy with themselves. Sad but it feels like home and comfort zone. But also it's different India. Modernized and westernised which makes you forget about the rest of the country. It's truly like parallel reality. Despite that there are still rape cases which I wouldn't expect if I didn't read it on news.

Buses used to freak me out the most. Firstly, there in unpredictable system from place to place. Here you have to buy ticket in bus, there you have to buy it at counter to get seat. Constant confusion. But as a foreigner you might always get seat because even if you try to explain that it's OK for you to stand, they just push you into the seat and now you have to be their friend. Secondly, in many buses works gender division. Front part usually is for women and back part for men. Another shocking thing is that in some states the bus tickets are cheaper for women. At first it seems as advantage but when you go deeper why is it so it's only an assault: "women are weak, women need support because they can't be on their own, women need help", it's like a charity from the "generous". Disgusting!
And those ayes that look at you constantly...you go by bus 4 hours and all 4 hours your every single move will be noticed. I did my mistake by staring back with an intention that they will get shameful and blench. I wanted to give an impression that I am not scared or less powerful..well, it does not work like that It only gave wrong vibes and expectations which I definitely didn't want to give. I understood too late that the aye contact in this culture has different meaning.
But when the bus is full, it is full. You might be hanging out from the doors and the only thing that matters is that you are somewhere inside.

Trains are my favourite type of transport! I never took first class because I wanted to feel the real India. During the travel I had unexpected period trouble when I started my fifty-five hour journey from Kerala to New Delhi. There was no possibility to buy any hygienic products. I had to use my own clothes because I simply didn't have a different option. And I am not the only woman who takes this long route. It's almost violent how these needs are denied. Not even a proper or separate toilet or bathroom where to refresh. Frustration.
Women never travel alone these long routes (lower class trains). Either there are group of women or some male companions. It's simply too dangerous to be alone in second class train. Majority passengers are shameless men who stare, take pictures, talk about a woman loudly and even catcall. And for that you don't need to be a foreigner. During the night it is especially scary because you can't really see the faces and how would that help if you have nowhere to run? We are always alarmed, it's the first rule: to be on track of what is happening around you.
So many times it simply pisses you off because you are less safe because of your gender! And then you get violent thoughts even if you wouldn't hurt a fly, you want to throw their phones away and stab them in the ayes just because all this insecurity and stress level makes you crazy.
My train travels were with my friend and/or Indian colleague. At all times I got instructions on what to say, what not to say, on who I should look and on who I shouldn't, with who I should talk and with who I shouldn't. I was thought to be suspicious to everyone. A 100% Indian person told me to never trust an Indian.

To be honest I broke my "woman rules" many times and those were the best experiences of my life. Full of adrenaline because I was aware of possible outcome...but my observation was that it's not a dangerous thing to break the rules. Women are told to be quiet, say yes, follow the men and never protest, that she is weak and born to obey but when a woman is actually independent and stands for herself, then men get confused, almost scared. If I was confident to talk, express my thoughts, say no and stand for myself, then they don't feel comfortable in front of me any more. It feels like the model of how woman should act is only a strategy on how to rule the society not because culture made it so. Women oppression is not natural as some sources might affirm.
In my opinion women empowerment must be in first step towards gender equality. It's a beautiful thing to be a woman, not a stamp of weakness and restrictions. We have to understand it and then stand for it. Men will do whatever it takes to stop this progress because it creates the feeling of losing power. And they might call you in the worst names, try to label you and impress their "standards" of how woman should behave. Don't give up, we know the truth!

Annually 1 December is World's AIDS day and it is an opportunity for people worldwide to unite in the fight against HIV, show the support for people living with HIV and to commemorate people who have died.

In 2010, women and adolescent girls made up about one in four people living with HIV in the United States. Most of these infections (75%) were from sex with men, and the rest were from injection drug use Black woman are the most impacted by HIV Less 50% of woman have ever been tested for HIV in developed countries Women have a much higher risk for getting HIV during vaginal sex without a condom than men do The main risk group is youth 13-24 years, although there is no age limit to get infected Ninety-two percent of the estimated HIV diagnoses among Asian women were attributed to heterosexual contact 50% of HIV infected worldwide are women HIV can't be spread through daily activities - handshakes, hugs, kisses, using the same bathroom etc The number of people getting HIV+ is decreasing