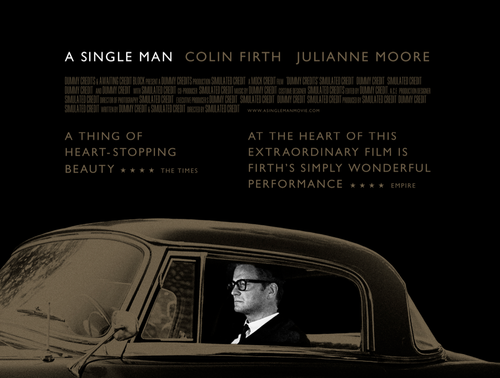 While these are not an obvious part of our repertoire, they still make sense to be watched from a feminist and I Being a Girl perspective. Even though cis-men are at the center of these movies, and women is only a backdrop for their drama and passion, it still emanates from no other place than patriarchy and the obsession with controlling the sexual and amorous lives of people. 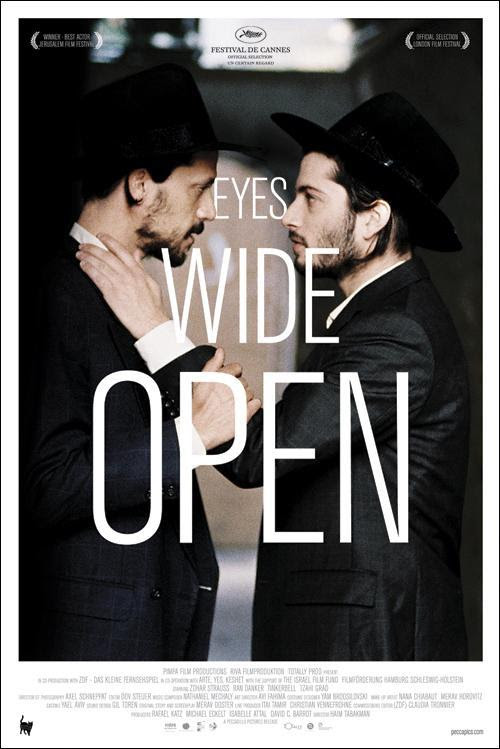 So, today's offer is two movies that look into the lives of gay men in culturally very restrictive contexts: A Single Man (2009, Tom Ford) and Eyes Wide Open (2009, Haim Tabakman). Set in two very different but undoubtedly socially controlling places - 1960's USA and nowadays Israel among the Orthodox Jews - both of them tell the dramatic tale of how even male privilege won't save you if you transgress the code of sexual morality.

Of, course there are differences. The aesthetics, trying to be true to time and place depicted, are very different. Eyes Wide Open adds a religious restriction where A Single Man deals with a more secular type of institutionalized homophobia. It is loss of a loved one when you are not really allowed to mourn vs. the discovery of lust where it's strictly forbidden and harshly punished. Nevertheless, the main theme is the social pressure to negate ones real desires and feelings in order to keep up with what's esteemed to be proper and moral. And what that does to people.

One of the lesbian versions of the same story would be Fire (1996, Deepa Mehta), already covered before here.


Our very good friend Smaranda (the one most responsible for the Inspirations e-book ) suggested that we share this here, and we salute the tip-off!

So, what this experienced and professional lady named Tracey Spicer is suggesting is... yes, taking it off! And not in pole-dancing-will-empower-you way, no. Instead it's about acknowledging how much time women (and men to some extent, yes, but that's a lesser order of magnitude) spend preparing their exteriors before they go and do things. And how many more things you can do if you decide to dedicate your time to things that actually bring pleasure, knowledge, fun, whatever...

The empowerment recipe here: rethink your time spent on grooming, ask why you do what you do and is it worth it, and then reclaim a bit of your utterly human freedom by shedding the unnecessary.
by Luīze R. No comments:

Friday is the (Inspirational) Movie Night: HIV/AIDS in the big cinema

Putting this under "inspirational" may be somewhat questionable. Movies that have HIV/AIDS as their central theme are not even expected to be inspirational (or uplifting). But in the light of the recent incomer into the genre - Dallas Buyers Club (2013, Jean-Marc Vallée) - a little, very critical round-up seems adequate. And all of those movies touch the activism theme, so they are relevant anyways.

While our all-time favorite still is Rent (2005), these do have some attractive points to it (and downsides too, unfortunately). Curiously enough, there's a decade between the release dates for all three while there are set pretty much around the same time, mid-eighties up to early nineties:

Philadelphia (1993, Jonathan Demme), the ultimate HIV/AIDS classic on the legal battle against discrimination. Has quite some real life inspiration.

Lessons learned: (a) privilege does not protect you from HIV, and (b) homophobia can be cured dealt with if empathy kicks in and if close contact / familiarity is established.

Lacks in the department of: women. Only at the background, and the whole battle for rights is fought among privileged men.

Lessons learned: (a) privilege does not protect you from HIV, and (b) HIV affects also those that are themselves sero-negative but with their lives inter-weaved in those of PLWHA, an obvious truth, but beautifully depicted. Also, (c) you cannot pray away homosexuality. Nor mental health issues.

Lacks in the department of: spirituality. All the angels, prophets, ghosts thing goes from whimsical to annoying to just crazy at times.

Dallas Buyers Club (2013, Jean-Marc Vallée), the quite shitty movie with a pseudo-alternative HIV/AIDS narrative that just got 3 Oscars. Also inspired by an actual person. Caused a major stirring not only because of the overall sexism of the movie but because of Jared Leto - a cis-male - being cast to play a trans person, and about how he does that.

Lessons learned: (a) heterosexuality (and homophobia) will not protect you from HIV, (b) homophobia is not cured dealt with just by lose contact / familiarity if no empathy can be activated, (c) the big pharma says is not always in your best interest, (d) traditional masculinites are bad for your health.

Lacks in the department of: women. Only at the background, and the whole battle for rights is fought among men. Women are the angry but passive doctor, nurses, and random people that men have sex with.

Other movies that we have talked about before where HIV drives some part of the plot are Kids (1995) and The Hours (2002).
by Luīze R. No comments:

Friday is the (Inspirational) Movie Night: The Snapper (1993) 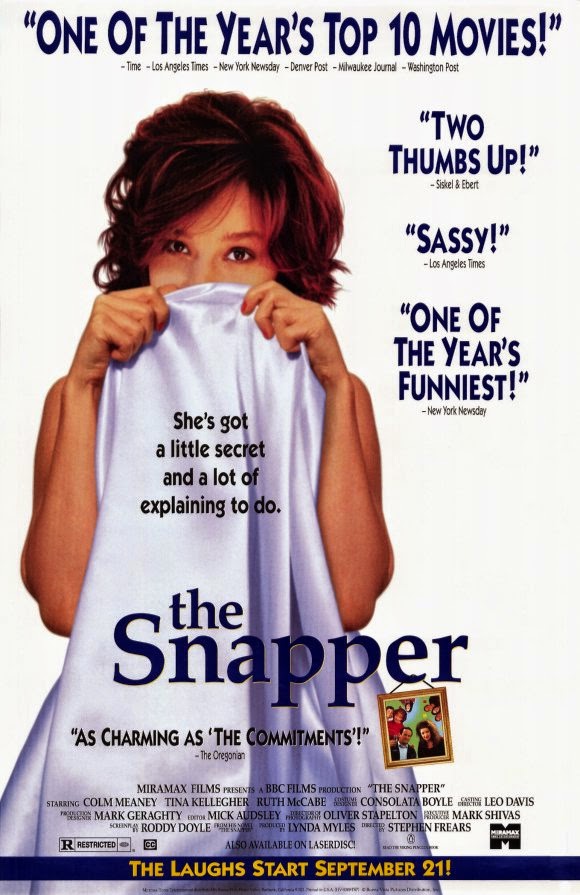 This one has lots of early 1990's written all over. Unless you are really allergic to that aesthetics, you're in for a curious one. The basic plot of The Snapper (1993, Stephen Frears) goes as follows: in a working-class Irish neighborhood, the 20-something Sharon has got herself pregnant (sic!) without being in a relationship, and she decides to give birth while refusing to disclose who the father is.

What follows is a pregnancy movie with a high dosage of slut shaming by the community, Guiness-drinking while pregnant and no conversation what-so-ever about the fact that all of this unplanned mess could've been prevented with some basic latex accessories...

Nevertheless, what makes The Snapper worthwhile is the portrayal of the neighborhood and family dynamics, how those who love you accept you and your life despite not being 100% in favor of your choices (and your accidents) while, how you should do the obvious by loving and protecting your loved ones, and how haters do not matter...
And stay alert for the stigma still pushed onto pregnancies with nobody male responsible for them, ignoring the idea that you can have children on your own. Be it a premeditated decision, or something that just happened, there are authentic and valid choices taking place.

This will do the cheering up if you are feeling somewhat depressed after having seen the other drinking-while-pregnant movie, 17 Filles (2011).

LaToya ♥ Being a Girl (and Girl to Girl is an amazing initiative!)

LaToya Lane is an activist in IPPF member association in Barbados, and recently - with the help of internets and many people who though that her ideas are worthwhile - have got the support to launch an innovative and much needed initiative that brings together business, agriculture and empowerment for young girls and women. 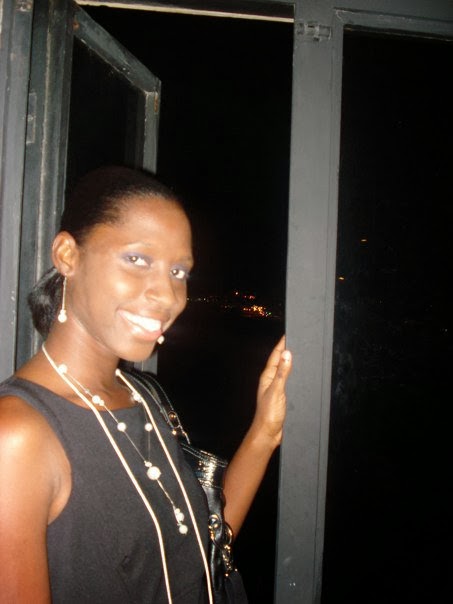 My Name is LaToya Lane and I enjoy reading, taking new courses, and listening to podcasts on business.

How did you start your work?

Its funny that you say work, because many people do not see volunteer as real work. I began my work with my local family planning association at the age of 17. I must say that when I began I never thought that it would have assisted me with such personal and professional growth. I have been able to move from the President of that association's youth arm (Youth Advocacy Movement Barbados) to Third Vice President on the Barbados Family Planning’s board of directors. I love working in the area of Sexual and Reproductive Health and Rights, and I am at my best when I am delivering information that could enrich someone else's life.

What makes you continue? Why are you still doing it?

I have come to realize that my impact or my reach may not be as large as I want it to be, but having the ability to assist people in making moves to change their behaviors one person at a time still counts for something. It is that ability to impact at least one person that motivates me now, the small changes I can help people make, as these will hopefully snowball into bigger life changes.

What is this your endeavor of yours "Girl to Girl" and what impact will it have?

Girl to Girl is a personal development program for young girls and women using agri­business as a uniting component. Girl to Girl will take 14­20 young women from across the island of Barbados, training them in the area of business, personal development and agriculture. It will allow these women, most who have no experience in farming, to grow a percentage of crop for their families/communities and the remainder will be sold in local markets to obtain further capital to sustain the project.