Friday is the (Inspirational) Movie Night: Spirited Away (2001)

Spirited Away (2001, Hayao Miyazaki) goes into the same box as much of children's adventure. Like Dorothy or like Sarah, Chihiro finds herself in a situation that requires her to become a better person than she has been so far and a braver one, too.
And somewhat more like Baby, she's challenged to stand up for people she loves (with no sexual connotations though, this is a PG animation apt for children).

According to Academy Awards, this is the best movie of Miyazaki (won the Oscar as best animation in 2003) who has been creating meaningful girl characters and girl-centered films throughout his professional life (see Nausicaä, Satsuki and Mei, Kiki, or Sophie). Probably the most convincing feature of them all is the multidimensional humanness (the one that Disney princesses lack to some extent).
Chihiro - and other characters, like the adorable witch twin-sisters - is cranky, capricious, and indecisive at times. They are not the same with all the people. They are angry, afraid, hungry... Like anybody, you know. And still they have the most breathtaking, epic adventures.
by Luīze R. 1 comment:

Email ThisBlogThis!Share to TwitterShare to FacebookShare to Pinterest
it's adventures, coming of age, friends, girls can do anything, hayao miyazaki, inspirational movies, personal growth

For a little walk in (again, a dramatized one) history, we offer Stonewall (1995, Nigel Finch). While it has 1990's written all over and sometimes makes you cringe because of awkwardness, it's still worth the while.

Playing with the idea that every LGBTQI activist has their own Stonewall story (yes, yes, go, read the wiki, we'll wait), so here you have one particular story with all the dramatic ingredients and dichotomies you wanted. Being out / being in closet. Trying to fit in / defying. Creating closed ghettos / suffering discrimination. Different ways of doing activism. Love. Friendship. Corrupt policemen. Street riots. Some jail. Lots of the Shangri-Las and lip-sync. Reminder that the most famous LGBTQI riot (and historical milestone) was fought by trans persons of color and not well-groomed rich white men.
Don't expect much from this, and you might be surprised. 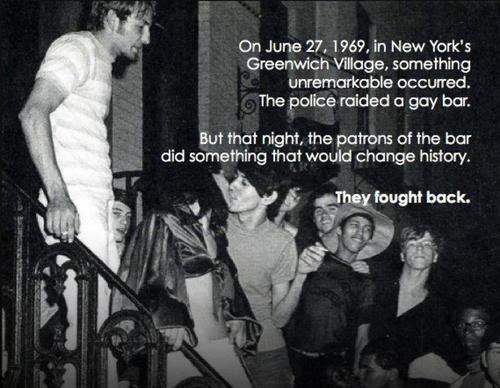