Jessica, a very content 4 year old, telling how marvelous the life is and how
she can do "anything good".
by Luīze R. No comments:

Email ThisBlogThis!Share to TwitterShare to FacebookShare to Pinterest
it's children, empowerment recipes, girls can do anything, inspiration, Jessica's Daily Affirmation, marius, videos


This movie is about Juno who is a funny, confident girl that "beats to her own drummer" and isn't bothered by what others may think of her. She has sex with a boy, becomes pregnant and goes through the process of weighing her options as to whether she should keep or terminate the pregnancy.
by I ♥ Being a Girl No comments:

If you haven't seen Persepolis (2007), leave whatever you are doing and run looking for it!

It's an autobiographic story about a girl coming-of-age during the Islamic Revolution in Iran, written and illustrated by Marjane Satrapi.

It's hilarious, funny and Marjane will become your hero, plus you will certainly tell you more about how it is to grow up being a girl in place where women are not that popular, really... and what cultural clashes you can get when getting to know the European ways of life.

As a teaser, here you can find a short fragment of the movie where Marjane tells how did it feel to go through the puberty.
by Luīze R. No comments:

Email ThisBlogThis!Share to TwitterShare to FacebookShare to Pinterest
it's coming of age, girls can do anything, inspiration, inspirational movies, iran, marjane satrapi, persepolis, puberty, videos

When Beyoncé says that girls run the world...

Amber expressing her outrage about Beyoncé's song "Run the World" in her Youtube channel Nineteen Percent, a piece that could be perceived as empowering...


...if you manage to ignore all the fair (and well researched) points Amber is making.


If you have no clue what is it all about, here you can see the Beyoncé's video.
by Luīze R. No comments:

Waking up in the morning, making a coffee and dressing up is the part of my daily ritual that helps me brighten up, gather my thoughts and think of what the day would bring. Between sleep craving and plans, I rarely think of what everyday life would be without the comfy jeans I am slipping on. Do you?
Women wearing trousers is often considered the greatest fashion revolution in the 20th century. Despite the fact that women had been wearing trousers long before that due to numerous reasons such as work and weather, it wasn’t till the middle of the century that they actually became a fashionable item. After years of struggle, today a woman wearing trousers or any other men’s accessory such as a tie is rarely considered scandalous in most parts of the world. However, I was surprised to discover it was as late as 2010 that the trouser ban for women was considered for de-legislation, after a number of unsuccessful attempts to overthrow it:Article. And this is happening in Paris- one of the major fashion centers???
The controversies of modern society sometimes show us we are not as liberated and free-minded as we consider ourselves. The quoted text from the book by Ian McEwan and the similarly titled movie also featured in the song What it feels like for a girl by Madonna and made me reflect upon equality and style in the 21st century. Though trousers are worn by women due to comfort and ease of movement they have also been viewed as a sign of power and equality, especially in the early days. However, as much as we consider ourselves equal, girls can wear “men’s” clothes but how often do you see a man wearing a skirt? (And I can surely say there is nothing better that a good free skirt in a hot summer day!) While trousers are usually described just as a garment skirts are exclusively clothes for girls. And this prompts the question: who does actually have more freedom of choice and expression?
No matter whether coming from struggle for equality, desire for comport or power, changes in fashion brought up a change in the image of women. Thanks to that, girls can experiment and find their style and identity while having fun. So express you self, be casual, formal, sporty or sexy depending on the day and your mood or why not try and mix them up a bit. Show what if feels like for a girl!
by I ♥ Being a Girl No comments:


Here, in I ♥ Being a Girl, we always try to look on the bright side of being a girl. Nevertheless, Precious, our first movie suggestion in section Inspirational movies, is not rosy at all.

It's harsh and it will take you to experiences you wish nobody would ever live. Imagine being a illiterate, overweight teen in Harlem, phisically and sexually abused who is pregnant with her second child... and, despite all that, she is trying to get out of the misery.

Quoting the tagline of the movie, "Life is hard. Life is short. Life is painful. Life is rich. Life is... Precious".

This is by no means your popcorn-night romantic comedy, it will touch you deeply, it will hurt and that's the way it's supposed to be.
by Luīze R. No comments: 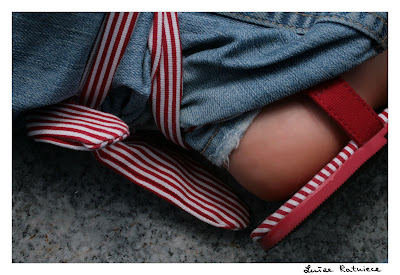 "I’ve made a decision.

I’m getting rid of my heels*.

Not that I wouldn’t like them or wouldn’t want to wear them anymore.
Actually, I’ve never been wearing them for real. I am just not able to move the way I am used to, move as fast as I’m used to.

Nevertheless, both too long and too short dresses stay, as well as all the pompous headbands, flowers and heavy earrings.

Here’s the trick - think it works the same way for boys and for girls just that girls tend to need reminders on this – if something you add to your body makes you feel better, great; if it restricts you, it has to go!"

* Read: giving them away to a second hand / vintage shop in Riga.
by Luīze R. No comments: