OK, so this is long time overdue. I was sure that this one has already be shared... but, no. So, here you have the icy (think of a sorbet!) treat for every season: Disney's Frozen (2013, Chris Buck & Jennifer Lee)!

So, why Frozen is better then the classical Disney princess stuff (think Cinderella)?
Two complex female protagonists. Some superpowers that need to be explored and dominated. The true love that breaks all the spells is not what you were taught it was. And *possible spoiler* the handsome prince is not the solution for all ills, quite the contrary.

Why is Frozen as good as any other Disney's classical (think The Lion King)?
It's fun for all ages, has great music, celebrates friendship, loyalty, and family.

Why is Frozen equally un-perfect as all the princess-centered child culture is?
While the plot is quite solidly empowering, the way the movie is drawn and was marketed reveals the same bias that female characters suffer in both animated and other entertainment areas. Read more here, here, here, here, here, and here.

With that in mind (and trying to ignore that somehow the heroines are so much smaller than the heroes and so barbie-like shaped), relax, get cozy and finally watch Frozen. Or watch it again.
Then get the soundtrack and sing along to Idina Menzel at moments when you have to let it go.

Friday is the (Inspirational) Movie Night: Bringing Up Baby (1938) 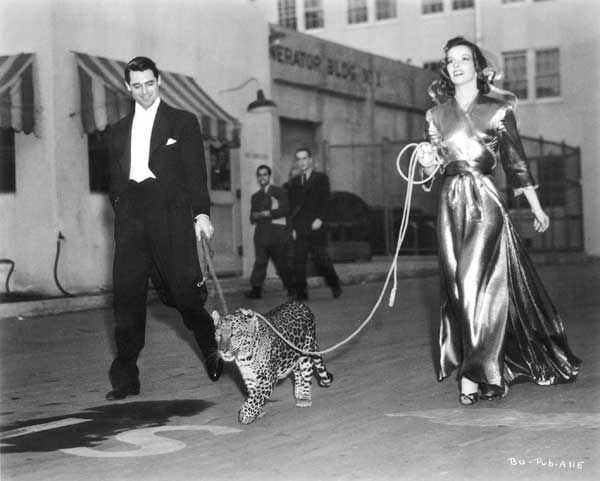 This is a very good one and very bad one at the same time. Weird, I know, but hang in there with me.

Bringing Up Baby (1938, Howard Hawks) is an old fashion comedy-romance with continuous silliness that ends with a happy finale. An almost Shakespearian comedy/mess, if you may. Entertaining, anachronic, and not much feministing to be expected here.

I warn you that most of the movie does point at humans in general - the protagonist very much so - as hapless and ridiculous creatures, unable to communicate among themselves. The most amazing Katharine Hepburn is obliged to go through a series of weird adventures and lots of banter, some of it very witty, some of it very obnoxious... and most of the mess is just because of a romantic whim of hers!

And that's exactly what's so powerful about this classic: the protagonist is a breathtaking, impulsive and clumsy girl that follows her hunches and just really wants to be with Carry Grant timid (and also clumsy) doctor Huxley. She does most extraordinary things and goes places because she has decided that she wants to be with this man. And she's so sharp and witty (so is her aunt, just to add intriguing female characters).

The same relationship dynamics could be very toxic indeed, but not in this case. She's the natural force that brings the dry scientist out of his shell and he (secretly) likes it.
Relax and enjoy, but do not try these tactics at home, at least not to the same extent!

*And the very final (no surprises there, though)!*