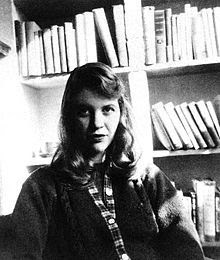 This is a tragic story. We've warned you. But it's also essential for your herstory knowledge and a very good way to empathize with the problematic of The Feminine Mystique, to understand the great drama of those women educated (therefore craving stimulus and self-realization) but confined to running a household and suffering whatever comes in order to keep up the appearances and keep the family together*.

We offer a double feature about the poet Sylvia Plath (1932-1963). Open her wikipedia page, scan through it, then start with the movie version of her acclaimed semi-autobiographical novel The Bell Jar (1963) - The Bell Jar (1979, Larry Peerce). A coming-of-age story gone sour is just what you need to observe the moment when the idealism and ambition (to become a renowned poet) clashes with the adult world. In this case the adult world implies dumbing things down for the audience of a women's magazine, men that think people owe them sex, fear of pregnancy, fear of the future, invasive and traumatic psychiatric treatment, the desire to disappear...

The novel is based on the experience Plath had while doing an internship in a New York magazine and her consecutive mental breakdown. A version about that summer in Sylvia's life can be read in Pain, Parties, Work: Sylvia Plath in New York, Summer 1953.


Then go on with Sylvia (2003, Christine Jeffs) covering Plath's career after the recovery, relationship with Ted Hughes, and suicide at the age of 30. While putting no stigma on Sylvia's history of mental health issues, the movie charts the path from poetry and love, through the hell of betrayal, inability to create and utter abandonment, back to writing from the darkest places of her experience and moving generations of people with the sheer force of her suffering.

The relationship dynamics are pretty much the same as depicted in Hemingway & Gellhorn (2012) - full of the struggle to create, to get out of the shadow of a celebrity-partner and deal with their ego - just more intense and with a tragic ending.


* Here it is about running a household instead of doing anything else as a consequence of social norms requiring it (while offering almost no alternatives, and demanding that you become a wife and a mother primarily even if you are a great poet, scientist, dancer, doctor...). It is obviously not the same as being able to decide to dedicate yourself to caring because that's what resonates with your most authentic self.
by Luīze R.